A human-faced bird in the opening ceremony

Unfamiliar to the general public

A sacred object in a Goguryeo mural

My colorful painting style is misunderstood as Chinese or Japanese

Tradition is the source of my inspiration

And a light on Korean art

We have to regard it as a future cultural resource. 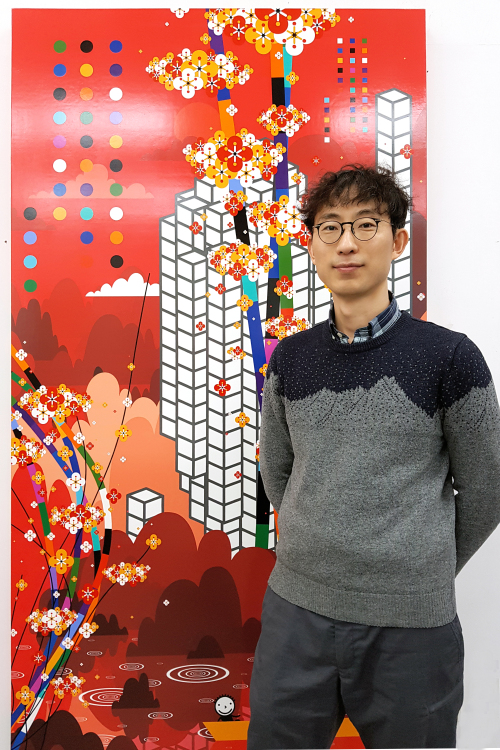 As in this opening event, officially displaying more traditional aesthetics could be a source of admirable ideas by artists and people engaged in the field of visual culture, he said.

“I’ve often heard that flowers in my paintings look like cherry blossoms, my character Dongguri has a Japanese-style name (Its pronunciation is by chance similar to that of the Japanese word, ‘どんぐり’ meaning ‘acorn’) or my red, golden (copper) colors are similar to a Chinese style. To my mind, however, these are elements are often discovered in our tradition. I also recently heard that my wave patterns bear a resemblance with those of ukiyo-e. But, this pattern is often found in paintings of the sun and moon and paintings by Jeong Seon.”

In fact, there are a lot of traditional elements we find in our everyday life but we tend to think have come from Japan or China. That’s mainly because such traditional factors have not been sufficiently addressed by the academic world or the press.

“As Korea has become advanced economically, its design has evolved and demand for traditional elements has risen. I think this is positive. The opening ceremony of the PyeongChang Olympics was carried out quite exquisitely on a shoestring budget thanks to Korea’s superb design capability combined with its effort to rediscover tradition. I believe the potential of Korean culture made it possible.”

Experts consider the ancient mythology pertaining to the man-faced bird was widespread in Northeast Asia in that its images were found in unearthed articles from ancient Silla and Baekje tombs and a variety of human-faced birds were depicted in the Classic of Mountains and Seas (Shan Hai Jing, 山海經), the first collection of Chinese myths.

“Some responded that my works look very similar to Japanese animation, which indicates that Japan has managed to bring traditional elements to even popular culture. We must realize that traditional factors can be possessed by those who inherit them. We desperately need to have a cast of mind that sees the traditions in our surroundings as enriched cultural resources.”

His character Dongguri has eyes like two ink dots, bristled up hair that resembles ink lines, and a big grinning mouth. People see it as a pop character.

“This is an inheritance of the tradition of portraying figures in Joseon landscape painting. Extremely pared down, this character is portrayed by dotting its eyes, nose, and mouth in ink and creating its round body with brush lines.” 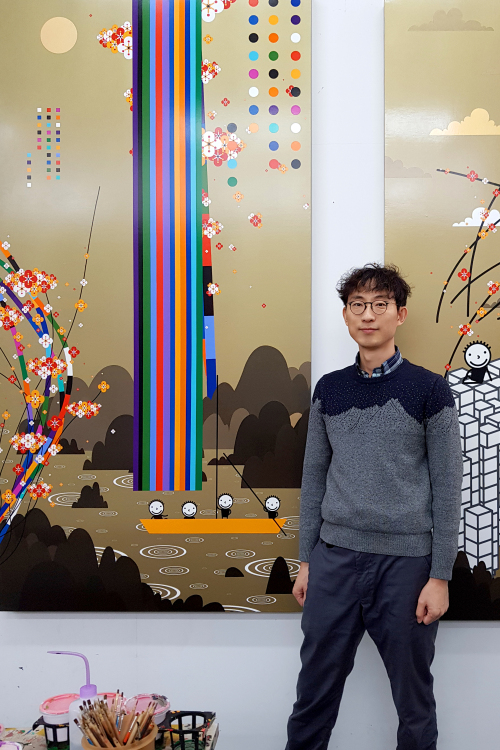 He resolutely declines to define his work as Korean pop art. If his works are defined merely as part of pop art, they are less unappealing to the global art scene , thus, what matters is differentiation. The majority opinion of the art world is that we need some keywords to define an army of artists such as Kwon Ki-soo, Lee Se-hyun, Kim Kira, Hong Kyung-taek, Hong Ji-yoon, and Jung Jae-ho who involve tradition in their contemporary exploration and a group of artists who engage in digital work.

“It is a time in which criticism and curation are desperately needed. Although text in the global art scene is considered less important, active criticism is still required in Korea where the base of modern and contemporary art is not solid.”

He hopes his art is criticized and interpreted by not only art critics but also by experts from diverse fields including music and literature. He plans to publish a collection of critical essays on his art along with articles that speak ill of his works from the perspective of contemporary art. If necessary, he is ready to accept other artists’ comments.

A tropical plant called tropic snow was growing thick in the office space of his studio I visited last Sunday. The green leaves featured in his recent paintings are also tropic snow leaves.

“I initially wanted to paint plantains like the ones depicted in Joseon paintings but I don’t know what they look like as I haven’t cultivated them. Instead, I painted tropic snow.”

He depicts liberal gestures so as to take a step forward in a way that is predicated upon tradition. He says he tries to have refreshments in an atmosphere like that of a resort.

How about plum blossom-like images? They appear immeasurably ostentatious with stems whose black lines are in sync with rainbow-colored fields.

“I do not paint plum blossoms. Points and circles have forged extremely beautiful images. My flower types were formed by putting several circles together.”

He thinks his majoring in Oriental painting made it possible for his flowers to resemble plum blossoms. Circles turn into lines or squares. A fountain also looks like an orchid.

“A circle can be said to have been the original form of my painting.”

His lines turn into squares or cubes, reminding viewers of bizarre stones or precipices in traditional paintings. People nowadays see them as apartments. This is a representation of the harmony between tradition and modernity.

The flashy rainbow image is brought from a rainbow bridge in traditional painting. It is an arch-shaped bridge spanning the valley peddlers or Confucian scholars passed through. This is also a symbolic passageway between this world and an ideal world.

“A round rainbow in my paintings turns into a straight rainbow while clouds turn into mountains and water. My illustrious colors derive from the tradition of Joseon’s color painting.”

Pestered by a dispute that it is dependent on a Japanese style, he stresses that we have to reform the tradition of Korean color painting. The variety of different colors he has developed are arranged in his studio with serial numbers. This results in his studio looking like a laboratory and serves as an opportunity to catch a glimpse of his intense work process.